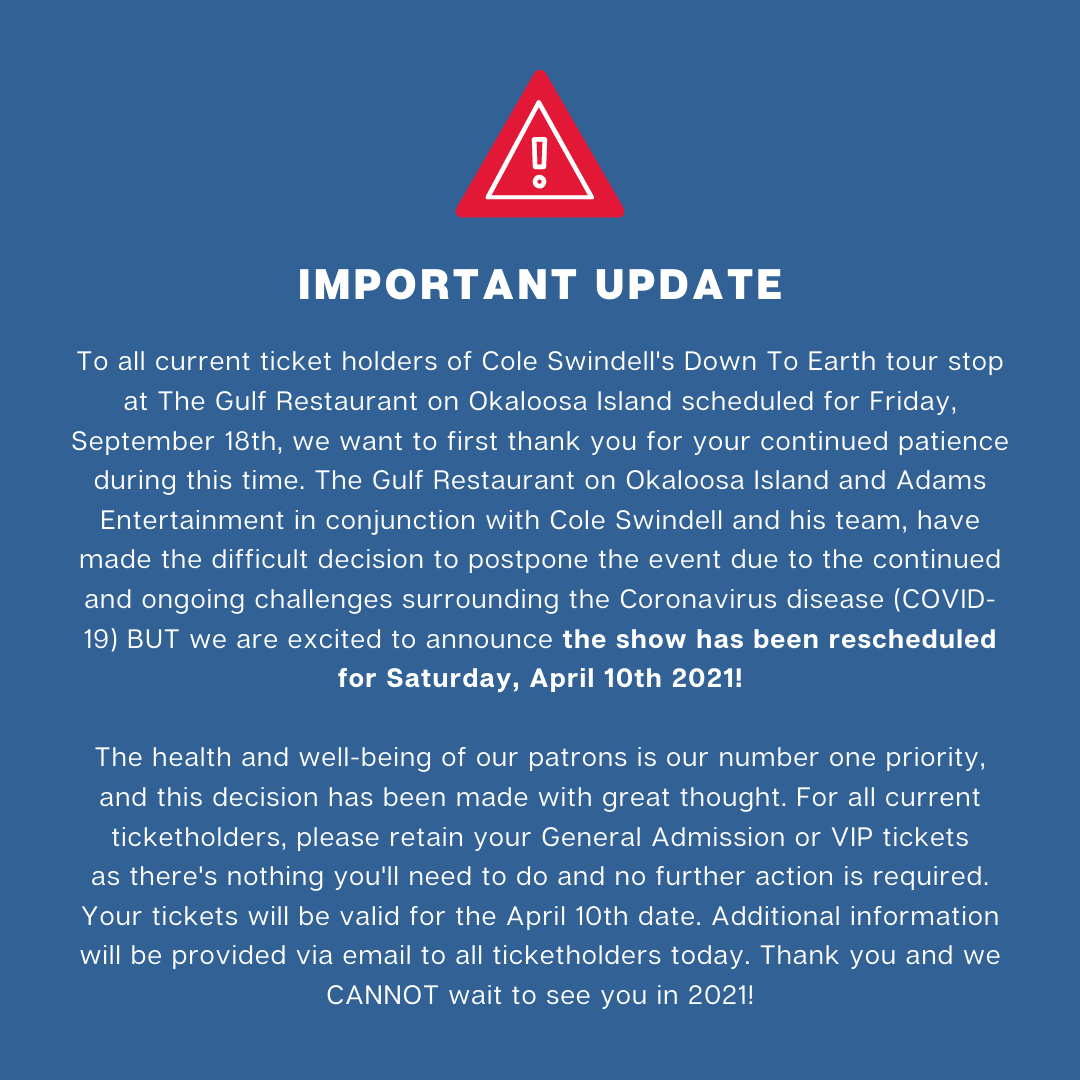 To all current ticket holders of Cole Swindell’s Down to Earth tour stop at The Gulf Restaurant on Okaloosa Island scheduled for Friday, September 18th, we want to first thank you for your continued patience during this time. The Gulf Restaurant on Okaloosa Island and Adams Entertainment in conjunction with Cole Swindell and his team, have made the difficult decision to postpone the event due to the continued and ongoing challenges surrounding the Coronavirus disease (COVID-19) BUT we are excited to announce the show has been rescheduled for Saturday, April 10th 2021!


The health and well-being of our patrons is our number one priority and this decision has been made with great thought. For all current ticket holders, please retain your General Admission or VIP tickets as there is nothing you’ll need to do and no further action is action is required. Your tickets will be valid for the April 10th date. Additional information will be provided via email to all ticket holders today. Thank you and we CANNOT wait to see you in 2021.

11-time No. 1 hit rising superstar Cole Swindell will launch his headlining Down To Earth Tour on March 5, 2020 in Toledo, OH. Joining Swindell on his Down To Earth Tour are special guests HARDY and Trea Landon. Click HERE for the tour announce video filmed at the U.S. Space & Rocket Center in Huntsville, AL.

Be sure to RVSP to the event page to keep up with exclusive announcements.

“I have had such an amazing year in so many ways,” said Cole Swindell. “I never think each year can top the previous, but it does. To earn another career No. 1 last week with ‘Love You Too Late’ and then the response and honors that ‘Break Up In The End’ received this year has blown me away and of course the opportunity to get to tour again this year with my buddy Luke Bryan has been a blast. I’m so fired up for 2020 to get back out there with two new artists whose music I just love and am really excited about. HARDY, Trea and I already have some fun things planned for this tour. The fans better get ready because this tour is for them!”

Since he launched his career in 2014, the Warner Music Nashville recording artist has been on some of the biggest tours with some of the biggest superstars in country music including Luke Bryan, Kenny Chesney, Jason Aldean, Florida Georgia Line and Dierks Bentley. The Georgia native first headlined in 2018 with his Reason To Drink Tour and co-headlined the Reason To Drink….Another Tour with Dustin Lynch.

Citi is the official presale credit card of the Down To Earth Tour. As such, Citi cardmembers will have access to purchase presale tickets beginning Tuesday, Nov 5th at 10am local time until Thursday, Nov 7th at 10pm local time through Citi EntertainmentSM.  For complete presale details visit www.citientertainment.com.

In the FIVE years since the release of his debut album on Warner Music Nashville, Swindell has toured with the biggest superstars in country music including Luke Bryan, Kenny Chesney, Jason Aldean, Florida Georgia Line, Dierks Bentley and officially became a headliner on his own Reason To Drink Tours in 2018. Swindell has sold out all four of his Down Home Tours in support of the Down Home Sessions I, II, III, IV. He kicks off his headlining Down To Earth Tour in March 2020. Swindell has racked up an impressive and incomparable record-breaking NINE No. 1 singles (the only solo artist in the history of the Country Aircheck/Mediabase to top the charts with first seven singles); 11 No. 1 singles as a songwriter; one 1 billion+ audience reaching single (“You Should Be Here”), eight Platinum singles; a Platinum-certified debut album (Cole Swindell); a Gold-certified sophomore album (You Should Be Here) and over 1 BILLION on demand streams as well as numerous SONGWRITING honors and awards including being the NSAI Songwriter/Artist of the Year (2016), winning two CMA Triple Play Awards in both 2015 (as the only performer to claim the title) and again in 2016 (for penning three No. 1 songs in a 12 month span) and Music Row’s Breakthrough Songwriter of the Year during his debut (2015) with celebrated songwriting credits which include not only his own but “This Is How We Roll” by Florida Georgia Line, “Get Me Some of That” by Thomas Rhett, and several songs with Luke Bryan including his No. 1 single “Roller Coaster,” among others. Swindell’s own eight No. 1 singles include “Chillin’ It,” “Hope You Get Lonely Tonight,” “Ain’t Worth The Whiskey,” “Let Me See Ya Girl,” “You Should Be Here,” “Middle of a Memory,” “Flatliner” and now “Love You Too Late.”

The Georgia native has played on some of the biggest stages in the world including making history being the first-ever live radio and TV broadcast from the 57th floor terrace of 4 World Trade Center, overlooking the Freedom Tower where he performed his hit “You Should Be Here.” He has played high-profile national television performances on NBC’s Citi Concert Series on TODAY, ABC’s Good Morning America, The Ellen Degeneres Show, Tonight Show starring Jimmy Fallon, Jimmy Kimmel Live!, ABC’s CMA Fest specials, CMA and ACM Awards, MLB Network and Sports Illustrated among others.

Big Loud Records/Tree Vibez Music HARDY continues to put his loud-and-rowdy stamp on modern Country music as both an artist and a CMA-nominated songwriter (Song of the Year – Blake Shelton’s “God’s Country”). Recently releasing HIXTAPE VOL. 1, touting 17 all-star collaborations (Keith Urban, Thomas Rhett, Dustin Lynch) on 10 brand new tracks, the unprecedented compilation album has been praised as “one of the most ambitious projects of the year” (Billboard). The countrified mixtape follows career-launching EPs THIS OLE BOY and WHERE TO FIND ME, which produced Top 25 debut single “REDNECKER,” the down South, swampy anthem that defines his brand of Country. The pride of Philadelphia, MS, is a member of CMT’s 2019 Listen Up class, Vevo’s latest DSCVR artist, and has been tapped as “One To Watch” by Rolling Stone, Amazon, Pandora and more. As a songwriter, HARDY is “one of Music Row’s most consistent hit-makers on the rise” (CMT), tallying four #1 singles in the last 18 months – Morgan Wallen’s PLATINUM “Up Down” (feat. Florida Georgia Line), FGL’s 2X PLATINUM “Simple,” Chris Lane’s GOLD “I Don’t Know About You” and Shelton’s PLATINUM “God’s Country.” HARDY just completed his first-ever headlining run on SiriusXM’s THE HIGHWAY FINDS TOUR in cities nationwide, after sharing the stage on tours with FGL and Wallen earlier this year.

Some people sing country music and some people live it. Trea Landon does both. Born in Daisy, GA, the twenty-five-year-old Warner Music recording artist was raised with a fishing pole in one hand and the keys to the pickup in the other. Equally at home on a four-wheeler as he is on a stage, this country boy translates his real-life experiences into music drenched with authenticity – telling tales of love, heartbreak, dirt roads and good times in a way that lets you know he’s lived all of it. With a lilting voice that lends itself to both stadium ready rockers and acoustic-backed love songs, Landon effortlessly combines a traditional tone with a modern edge. Citing fellow Georgia-natives The Peach Pickers as one of his major influences, Landon followed in their footsteps to Nashville in 2015 and landed a publishing deal within four weeks of his arrival. A major label deal with Warner Music Nashville followed just two years later, which he recently celebrated with the release of his debut tracks “Loved by a Country Boy” and “Get The Girl.” As he prepares to take his music to radio this summer, Landon – who was already toured with the likes of Luke Combs, Riley Green and Craig Campbell – continues to play for fans all across the country. For more information go to trealandon.com.

For complete information and upcoming tour dates, sign up for the Down Home Crew at www.ColeSwindell.com.